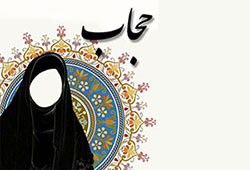 According to history - before Islam - Jewish, Iranian, and Indian women used to cover their hair and faces with different models of veils.‎ Historians and sociologists believe that the reasons behind it could be philosophical, social, economical, moral, and mental

۱) Philosophical reason: in some nations like Roman Empire, in the early centuries of Christianity, people used to believe that sexual desires prevent them from achieving perfection.‎ Therefore, in these nations, women - as symbols of sexual attractiveness - used to be considered as social evils.‎ They were forced to stay at homes and cover their bodies completely in order to avoid exciting men

۲) Social reason: In Iran, kings and powerful people used to have many wives.‎ For example, kings used to have hundreds women in their palaces.‎ A king used to gather beautiful women from different parts of the Empire and keep them in the palace to have sex.‎ Therefore, ordinary people were in danger of losing their beautiful wives.‎ For the sake of security and safety, they used to hide their wives at homes.‎ In public places, women used to cover their faces in order to hide their beauty

۳) Economical reason: Men used to be the managers of homes.‎ They used to force women to stay at homes and to do the housework.‎ Little by little, it caused women to hide themselves from men

۴) Moral reason: Men are naturally zealous.‎ A man instinctively likes to protect his wife against other men's evil thoughts.‎ This zealous supporter might force his wife to cover her face in public places

۵) Mental reason: When women were menstruating, they were not allowed to go to public places.‎ They used to hide themselves from other people, because menstruation used to be considered evil and dirty

Islam has got its own philosophy for 'Hejab' which is different from all other philosophies and reasons.‎ In the Holy Koran, there are two verses that God has given us his instruction for Hejab

[۳۳:۵۹] O prophet, tell your wives, your daughters, and the wives of the believers that they shall lengthen their garments.‎ Thus, they will be recognized (as righteous women) and avoid being insulted.‎ GOD is Forgiver, Most Merciful

According to these verses, in public places and in front of strangers, women have to cover their bodies, except their faces and hands!‎ They must not reveal their beauty for other men.‎ They must not send sexual signals by special movement, special way of walking, special way of talking, etc.‎ Why?‎ Women are ordered to follow those instructions because they are useful for themselves - they will not be raped or considered as sex appeals.‎ They will not be suffered from sexual abuse, they will not be thought as objects, they will receive respect, etc.‎ In addition to this, putting their curves on display in public places, threatens mental health of the public.‎ Therefore, women can participate in different activities in the society provided that they avoid using their sexual capabilities and attraction as a tool

۱) 'Hejab' has been before Islam in many nations and it has been even tougher than
۲) In Islam, the philosophy of 'Hejab' is different from all other philosophies.‎ It is logical and human
۳) In some countries women often cover their faces.‎ That is not the instruction of Islam.‎ That is maybe a misinterpretation or selfishness.‎ As it is mentioned above, in fact, that is like following traditional customs which used to be before Islam;‎ in Iran and Roma Empires, for instance
۴) Women are ordered to cover their bodies (not their faces and hands);‎ no matter how and what the colour of the cloth is
۵) Hejab is not a personal view.‎ It is explicitly ordered by God in the Holy Koran

Some people criticize Islam for causing women to be put in prisons called homes.‎ They believe forcing women to stay at home or to wear special clothes is against human rights and freedom

This criticism sounds beautiful, because some sugar- coated words like freedom and human rights are used in it.‎ However, these people should know that Islam never forces women to stay at homes.‎ On the contrary, it wants women to participate in social activities - in case they have abilities, talents, and capabilities - provided that they avoid using their sexual tools.‎ Using sexual tools is harmful, because it causes a lot of psychological and mental damage.‎ In addition, it has many bad effects on safe lives in the society

Secondly, these people must define freedom and human rights clearly.‎ Of course, western philosophies with a beautiful motto called freedom were successful in taking women out of homes, but where have they made women active?‎ On beaches, in dancing places, in bars, in sex industry, in fashion modeling, etc.‎ It goes without saying that those materialist - based philosophies have destroyed the foundation of the family, but what have they built

Finally, according to available evidence, those critics do not really care about women and their rights.‎ They care about their own sexual fulfillment and economic benefits of sex industry.‎ If we thought about the huge amount of money which is spent on producing lipsticks, powders, and other stuff related to women's make up in public places, we would find out what is behind those beautiful mottos - freedom and woman's rights!‎ If we could calculate the amount of time which is spent in front of mirrors by women, we would know what sorts of prisons poor women are put in!‎ If we could measure the respect which is shown by men to women, we could understand what the fact of the matter is!‎ In short, what the west has done on women is like persuading someone to kill him/herself happily.‎ It is actually barking up the wrong tree

Some people believe that imposing limitation on something causes greediness!‎ That is true for something like food or stuff like that, but when it comes to considering thirst for power, health, knowledge, having sex, etc.‎ it does not work.‎ The more love you make, the more thirst you feel for it.‎ That is a proven fact and all people instinctively are aware of it.‎ Some people are fooled into believing that when something is easily available, people's passion for it will weaken.‎ However, according to what is seen on the Internet and in films, and according to newspapers;‎ despite employing censorship, the fact is something else.‎ Nudism has aroused all forms of passion

Some Bitter Questions
A few years ago the poem 'the first night of marriage is not less than kingdom, provided that a boy is helped by his father with getting married' was commonly used by people.‎ My question is this: Why do not people use this poem any longer?‎ Why are the marriage rate reducing and the divorce rate rising?‎ Why are not young people interested in getting married?‎ Why is love dead

I respect your views and other friends' views, but we have to take everything into consideration before making our judgement.‎ We have to carefully consider the facts.‎ For example, we have to think about these questions: 1) What has caused some people to get interested in gay marriage?‎ 2) Where is the origin of HIV and what makes it epidemic in the world?‎ 3) What destroys or threatens the foundation of families in all nations?‎ 4) We(men and women) are human beings, why do women have a tendency to put their bodies on display?‎ 5) Who makes decision about the amount of body someone can put on show?‎ 6) What are the negative and the positive sides of nudism

You are well aware of the answers of those questions.‎ Serious social problems in different societies raise many questions, but I do not intend to list them.‎ However, the death of love sounds very sad.‎ Why is love dead?‎ As you know, love is a great feeling.‎ In fact, love between two opposite sexes is one of the miracles of the universe.‎ If we consider men as water and women as fire, we can understand what has made love dead?‎ Imagine there was a fire.‎ What would happen if we pour water on it?‎ The water might extinguish the fire.‎ Now, imagine we poured the water into a pot and put it over the fire.‎ What would happen?‎ In this case, the fire will make the water boiled.‎ Therefore, we can normally say when women and men are separated from each other (there is a pot between them) love (the boiling of water) will be seen.‎ Otherwise, when they are mixed together, there is no love!‎

According to Sigmund Freud, sexual obsession is the main reason of all disorders.‎ This is true, but it is only one side of the coin.‎ Unfortunately, opposite side of the coin was not seen by him and by other psychologists.‎ Nudism was not the solution of those disorders!‎

In my opinion, people who support nudism are actually putting more dry wood in the fire.‎ They are strengthening the fire.‎ Consequently, the fire will destroyed many things.‎ This is what human beings should know, and must think about